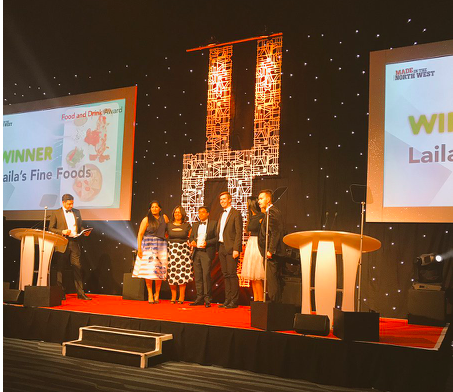 Laila’s Fine Foods are pleased to have won the Food & Drink category at this year’s prestigious Business Insider ‘Made in the North West Awards.’

A panel of industry judges voted on the shortlist and the winners were announced last night in a ceremony at Bolton Whites’ Macron Stadium. Laila’s will now automatically go through to the grand final, Made in the UK, where the best of British manufacturing will be celebrated.

This year, Laila’s Fine Foods have continued to build the business, reaching number 8 in the Grocer ‘Fast 50’ which charts the fastest growing, independently owned FMCG companies, whilst also appearing in the Financial Times 1000 Fastest Growing companies in Europe.

This increase has led to the ready meal manufacturer investing in a 36,000 sq ft expansion of its factory and production facilities, which are based on Moor Park Avenue in Bispham. In addition to expanding its premises, the company has increased their number of employees to over 400 people and invested in state of the art manufacturing equipment.

Joint Managing Director, Nazir Remtulla comments, “Laila’s Fine Foods are passionate about quality manufacturing and will be proud to represent the North West, a region with such a rich manufacturing history, at the National Finals in Liverpool on the 22nd June. We are really pleased to have won as to even be nominated is a huge achievement and is testament to the hard work and ambition of the entire team.”