The show’s presenter, Kate Quilton, headed to the Fylde Coast earlier this year to have a tour of the factory, which produces over 120,000 ready made meals per day, alongside Iceland Own Label & Packaging Manager, Ian Schofield.

The show followed a recent pledge by supermarket Iceland to become the first major retailer to commit to eliminate plastic packaging for all its own-brand products.  The supermarket chain, which specialises in frozen food, said it would go plastic-free within five years to help end the “scourge” of plastic pollution.  The current plastic packaging would be replaced with paper and pulp trays and paper bags, which would be recyclable through domestic waste collections or in-store recycling facilities. 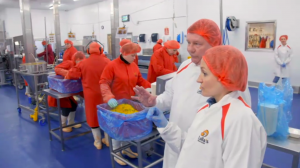 As a key Iceland own label supplier, Laila’s Fine Foods started to produce the the first products to be in the plastic free containers, a range of children’s ready meals, earlier this year with Managing Director Laila Remtulla commenting; “We are really excited to be part of the introduction of the cardboard trays.  From an innovation and environmental point of view this significant first step that Iceland are taking will hopefully pave the way for us as manufacturers and other retailers to reduce the amount of non-recylcable plastic that is currently going to landfill in this country.”

Food Unwrapped airs on Channel 4 on Mondays at 8pm and reveals the truth about everyday foods. The episode featuring Laila’s Fine Foods can be viewed online at http://www.channel4.com/programmes/food-unwrapped/on-demand/65676-011